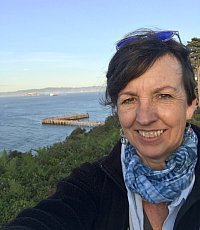 Am I In Service?

Just the other day, I had an epiphany.

I work at a restaurant as a host -- when people come in, I greet them and I take them to their seats. It's a simple job, but I do a lot of things to help the servers. Partly it's because the bulk of my pay is from a small share of the tips the servers receive.  But a lot of the things I do, because I want to be helpful.

Since I've started the job, I've been quite particular about the pay. On busy days, when they have another co-host with me, we split the money. It isn't a lot of money, so when it's a slow day, I'd rather have other hosts helping in the back -- and I noticed that I was getting a little snarky about it and it's been a point of contention with management.

The other day, the bartender was really busy. So I took a couple of orders on the phone for him -- so that will go to the order queue, get prepared and get ready for pick up. Now, many people will give the bartender a tip as well. And in my mind, I was thinking, "I'm doing the work for him, but he'll end up with the tip." It happens a fair amount, but this one moment yesterday really became a revelation.

As I was standing there in the restaurant, in that brief passing moment when I noticed that he'll get the tip for this, I remembered -- what am I in service to?

I'm in service to the bartender, helping him when he's busy. And it isn't about one-to-one compensation. If I'm worried about transactional compensation, then I will never have enough because I could never do enough to fill that bottomless bucket. And that also implies that what I do in service would never be enough either!

It was just me standing there and suddenly, this veil lifted from my consciousness. I've struggled with money my whole life. And I'm just so incredibly grateful to now hold it with a heart of service. Just letting go of the transactional mentality. We don't have to live that way. We can serve unconditionally.

I'm just so incredibly grateful for this space. It's been helping me to open my heart. Thank you.

If you'd like to join a similar circle, please explore upcoming pods.